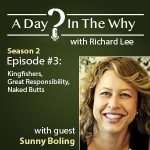 Our guest this episode is Sunday Boling, a Hollywood casting director and a friend of mine from another life – circa high school, in the last decade of the prior millennia.

It was fascinating to hear about her journey from somewhat shy, mostly broke high school student to accomplished, confident casting director, and to hear how her values played into that. 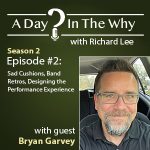 Our guest this episode is Bryan Garvey, a local designer, musician and all around really nice guy. I met Bryan a few years ago at Scripps Networks, when Bryan was a designer and I was running a team in Ad Operations. 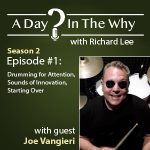 Drumming for Attention, Sound of Innovation, Starting Over From Scratch

Joe is a very interesting fellow. A cool cat…a serial entrepreneur and innovator in the field of sound and music, and one of the few folks (let alone ones over 60) I’ve heard sling around terms like NFT, blockchain and ledger who knew what they were talking about. 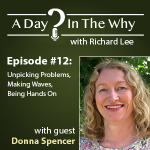 Donna Spencer is a talented designer, author, conference organizer & speaker based in Australia whom I had the pleasure of meeting first in 2013 at Midwest UX. She is incredibly gracious and smart as a whip, so I was thrilled she agreed to join me to chat about her experience navigating the world of design, tech and training. 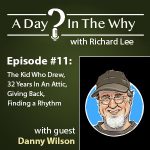 The Kid Who Drew, 32 Years In An Attic, Giving Back, Finding a Rhythm

Danny Wilson is a Knoxville-based illustrator I became aware of as a senior in high school. It was a blast catching up with him and hearing about his personal road to the role of seasoned illustrator. Definitely lots to dig into here. Enjoy! 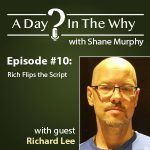 This episode features my friend Shane Murphy taking the reins and I step into the role of podcast guest – sharing my own personal road to the role, values and goals. 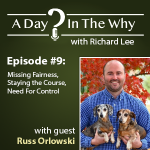 I first ran into Russ in the neighborhood Facebook group I administrate, and have seen his listings around town as well as appreciating the remodeling and landscaping he and his partner have completed in the last couple years (very well done, very tasteful.

Unlike most of our guests, Russ didn’t have a winding career path – he was fortunate to have found his niche early on and has stuck with it through several boom & bust cycles, in both self-employed and employee modes.

His specialty and preference is helping first time home buyers, so I really appreciated his insights on the housing market these days (and how unfair it is to those first time buyers). 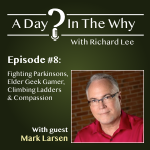 Nope, he’s just a self made man and now he’s retired! I met Mark when he brought me on as a web designer with one of his companies, Digital Media One, back in 2005. I have personally learned a lot from the man, about video production, client handling, and kindness. (Also learned to keep my head down in first person shooters because the man is a deadly sniper, but that’s another story.)

Mark’s career, his battle with Parkinsons, and his continued terrific attitude and energy in the face of adversity are an inspiration – I think you’ll enjoy this one! 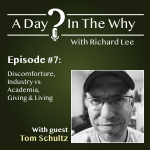 Tom Schultz is a veteran content creator with a deep focus on instructional and curriculum design in the agriculture space, from planning through capture, development, design, and delivery.

In short, the boy can write, shoot and code. 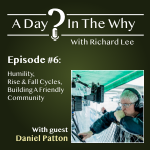 A Day In The Why
Daniel Patton - Episode 6

With a background in engineering that segued into modeling and animating some really neat mechanical components, he’s been shooting video since childhood and really hit his stride after his second boom/bust video production kit/crew cycle – there’s no stopping him now!